What is the difference: Wireframe vs. Mockup vs. Prototype?

These terms are often used interchangeably﻿, which may introduce confusion about when and how you should leverage each one during your product development process. Choosing the right one at the right stage ensures that the correct level of effort is invested so that you can deliver functionality that solves a real customer need.

How do wireframes, mockups, and prototypes compare to each other?

It helps to start with some high-level definitions:

One way to quickly understand the difference between wireframes, mockups, and prototypes is to compare them visually. Below you can see a wireframe, mockup, and prototype for a new mobile application. The wireframe is very low-fidelity — simple boxes and text convey a concept. Next, the mockup has added logos, colors, and icons to make it more realistic. And finally, the prototype is usable and clickable. 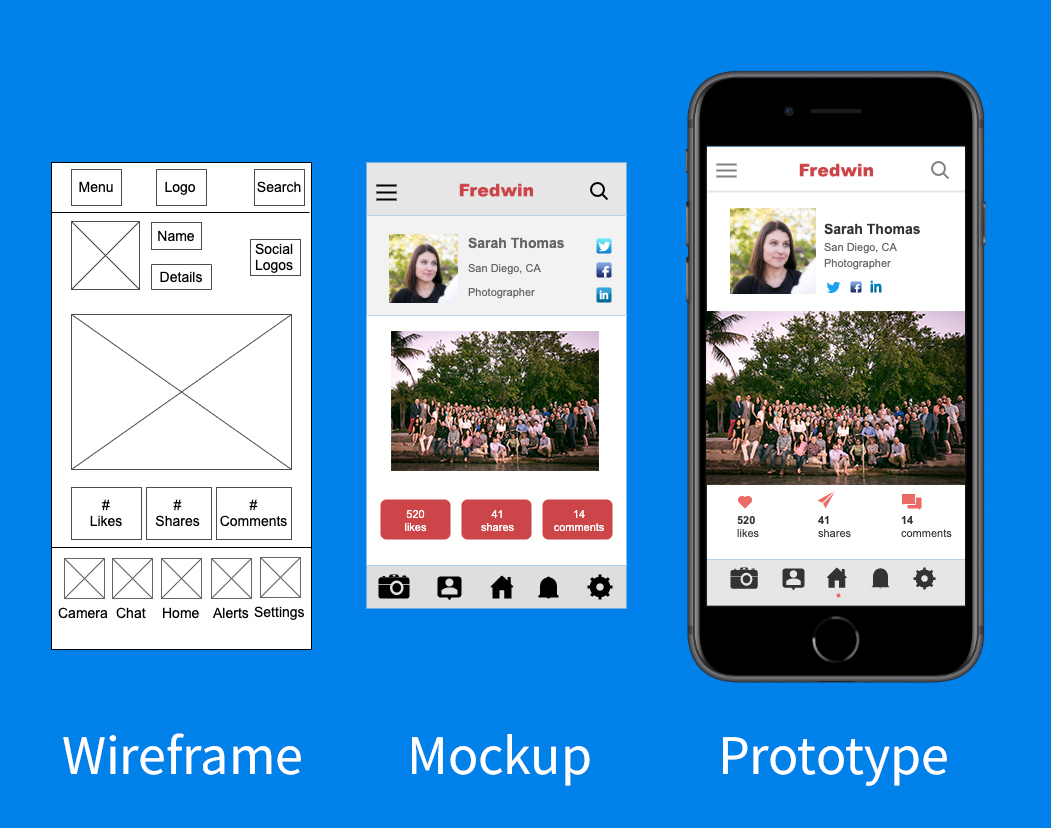 You will not necessarily need to create all three for every product or feature you work on. Depending on the level of feedback and visibility needed, a wireframe or mockup alone can get you the necessary buy-in. The table below compares the differences between wireframes, mockups, and prototypes in greater detail:

Wireframes are the foundation of the design that everything else is built upon. They are black and white depictions that rely heavily on grey boxes and text to represent what a product will look like. They are low fidelity and quick to create and are often used in brainstorming sessions. Creation can be done using paper and pencil, a whiteboard, or in a product management tool — and does not necessarily need to be done by a UX designer. Product managers may jump in to help ideate.

Wireframes should be used to reach consensus on the core functionality of a concept. The absence of visual elements like colors and logos is intentional as critiques should be focused on whether or not the proposed layout or arrangement would help users, not visual details.

Mockups elevate wireframes to the next level by adding design choices such as color schemes, fonts, icons, and navigation elements. More than one mockup is usually created, providing decision-makers with multiple options to evaluate. Actual content is often included to make the renderings more representative of the final product. More effort is required to create mockups and more skill as well. A UX designer will use digital software to create and present the options.

When the mockups are presented to stakeholders, a more detailed visual critique is encouraged. The realistic portrayals make it simple to assess what makes sense about the designs from the users perspective. Comparing mockups helps the team agree on a design direction. The static nature of mockups allows for easy incorporation of any changes or requests.

Prototypes are developed when usability testing and user feedback sessions are needed. The prototype will look very similar to a mockup, but elements of interactivity will be added using UX tools like InVision and Sketch, not actual code. As such, the prototype will not be fully functional, but elements will be interactive enough for core concepts to be validated.

Once developed, prototypes are invaluable tools in user testing. The ability to see how a real user interacts with the product or feature provides insights for the entire product team. After testing rounds are complete and applicable feedback is incorporated, the prototype moves over to the development team for execution.

Wireframes, mockups, and prototypes bring clarity to what customers really need so teams can build a product users love. Many product teams choose purpose-built product management software to centralize product strategy and build and share visual product roadmaps. Tools like Aha! include mockup capabilities as well as file storage integrations so teams can easily access the latest designs alongside their product plans.

Previous
How should product managers use wireframes?