Quantum computing in the real world

Why does it matter?

As we have recently entered a new decade, I have been thinking about the next leaps in computer science and where some of those areas may be. One such area that I have read a lot about in passing but never really explored is quantum computing. I believe quantum computing may become very important in the future, as it will provide us with an opportunity to do parallel computing in ways that have never been possible before with classical computers. Such areas include:

In order to understand how a gate-based quantum computer works, we need to understand two principles of quantum physics: superposition and entanglement.

Superposition — In classical computers we always know that a bit is either a 0 or 1. Anything else is simply an error state. However in quantum computers, using the principle of superposition, a quantum bit (qubit), can both be a 0 and 1 at the same time. When we "observe" a qubit as a classical bit, it collapses back to a 0 or a 1 based on a probabilistic model.

Entanglement — This is a more complicated principle in quantum computing and can be the most difficult to conceptualise. When we have two qubits that are in superposition (i.e. the qubits represent the states 00, 01, 10, and 11 at the same time), and we collide the two qubits together, upon collapsing one of the qubits to its classical state, we know what the outcome of the other non collapsed qubit will be when we collapse it. So the two qubits are correlated, upon entangling them together. An example further down in this article will help explain this further.

In this image, we see a 0 qubit, as the top number in the vector represents the probability of a 0 after classical bit measurement. So there is a 1 representing a 100% chance of observing a "0" bit upon measuring with a classical bit. Conversely, the bottom number in the vector represents the chance of seeing a 1 bit upon observing the qubit. It has a 0 probability. 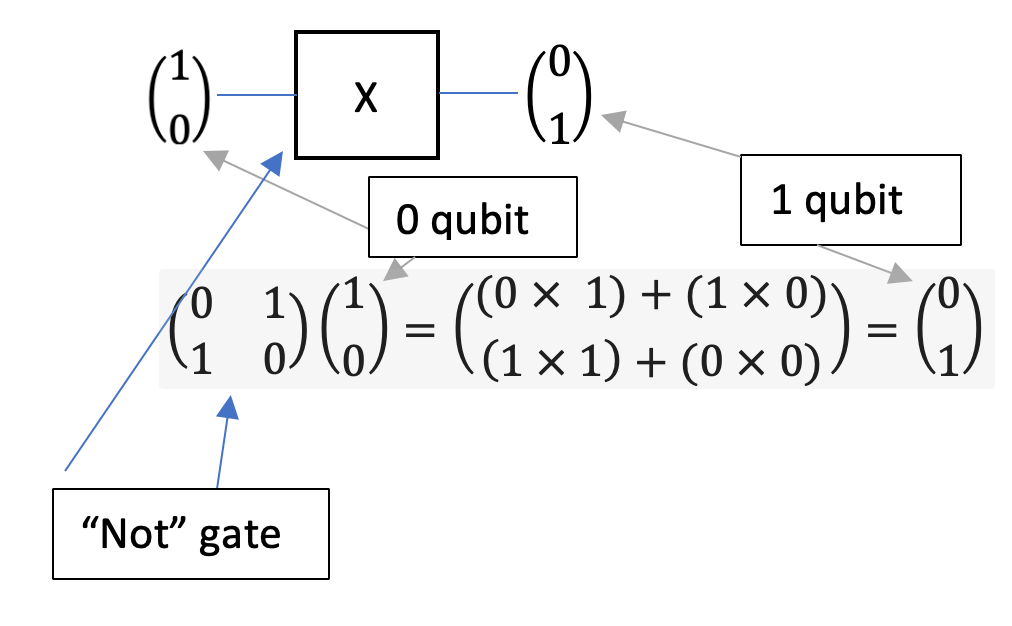 This is a simple example of how gates work in quantum computing. However things begin to get more interesting when we do not have a 100% probabilistic outcome of a 0 or 1.

This is a Hadamard gate — upon applying this to a 0 qubit, we get this strange result in the vector with non-integer numbers. What does this mean?

As seen, we can represent a single quantum as a vector, but how do we represent multiple bits? 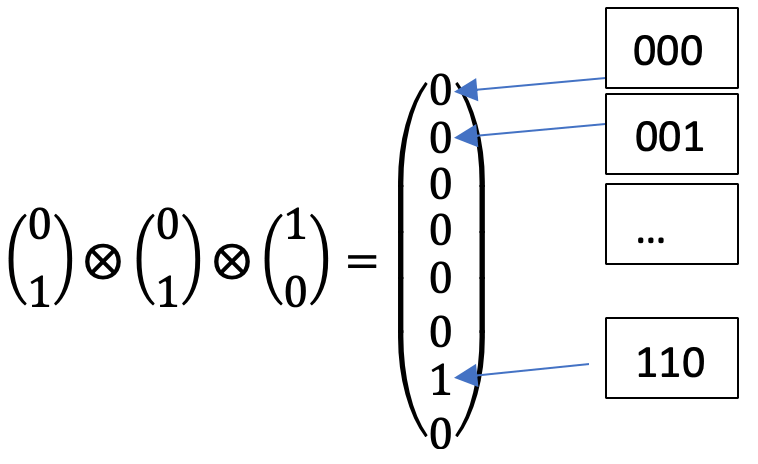 We can display them mathematically as vectors being tensor multiplied. We can see here a 110 being represented as a single vector after being tensor multiplied together. You can observe that the probabilistic model still holds for a single vector that is longer than just 2. The top number represents the probability of a 000, second number a 001, third number 010, etc until we get to the second last number which represents a 110 with 100% chance (from the 1).

This is important if we want to understand an entanglement circuit: 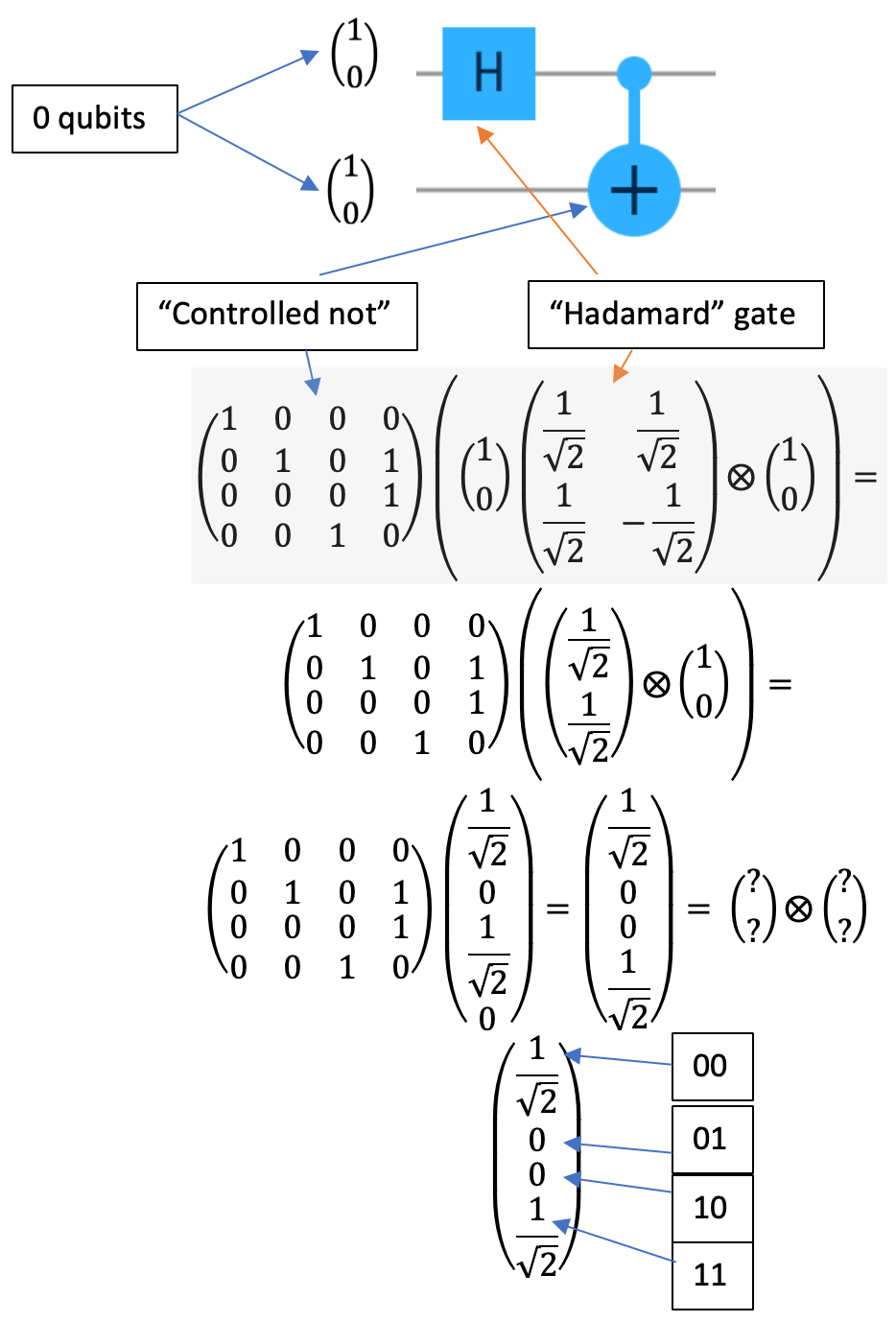 The initial state for our two qubit is 0 each (represented by the tensor product). We then apply a Hadamard gate to put one of the gates into superposition, followed by actually calculating the tensor product so we get a vector with length 4. We then apply a special gate called a "controlled not gate", represented by the 4x4 matrix. Which lands at a slightly modified vector with length 4.

Congratulations, you have now mathematically shown the entanglement principle of quantum mechanics that we mentioned earlier!

However, what we observe is that it isn't quite 100% of the time 00 or 11. There is some noise! This is because in the real world, quantum computers are delicate machines highly sensitive to outside interference. This is why if we run this circuit 1000 times, we see that sometimes it can stray from what the theoretical results can be, just like silicon in a classical computer can have errors due to physical imperfections. At the time of this writing, there are some limitations in quantum computers that are available. Most quantum computers today do not have many bits available to use due to the high error rate with each additional bit made available, so it makes it impractical for some of the uses we talked about earlier.

That said, one of the most talked-about algorithms where quantum computing will end up being used— is Shor's algorithm:

Given all this, I think it's prudent for us to keep an eye on developments in this field and to understand the advantages and disadvantages of quantum computing as a whole.

Toray enjoys learning about new engineering problems and figuring out the best way to solve them. He is a Senior Software Engineer at Aha! — the world’s #1 product development software. He has worked on many of the features in Aha! that you know and love.